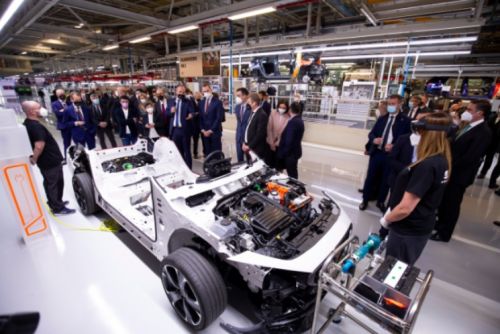 “The project will allow the development of a set of actions to guarantee that Spain has the necessary infrastructure, installations and mechanisms to autonomously and competitively manufacture a connected electric vehicle,” she said.

The partnership, which initially involves the Spanish Volkswagen subsidiary Seat and the utility Iberdrola plus financial group Caixabank and phone firm Telefónica, should allow Spain to “carry on being a global auto industry leader, banking on sustainable mobility,” Maroto added.

The minister later confirmed the manufacturing facility would cost around 5 billion euros ($6 billion), although it was unclear from press reports[1] whether this referred to the total investment or the amount coming from the government.

Spanish Prime Minister Pedro Sánchez Pérez-Castejón also referenced the electric vehicle program. Along with the battery facility, the government will push for the creation of a strategic plan for the development and leadership of electric vehicle manufacturing, he said.

A choice of locations for battery manufacturing

Sánchez Pérez-Castejón and Diess visited the site along with the king of Spain last week to commemorate the 70th anniversary of Seat’s presence there. The visit and the accompanying announcement were significant because in nearby Barcelona, another major carmaker, Nissan, is in the process of closing down three manufacturing plants.

The closures were a blow to the Sánchez Pérez-Castejón administration and the regional Catalan government when they were announced during coronavirus lockdowns in May 2020. Reuters had last month reported that the Nissan plants could be converted to battery manufacturing at a cost of €6.8 billion ($8.1 billion), to come from the €140 billion ($167 billion) that Spain is due to receive in European coronavirus recovery aid by 2023.

Schneider Electric of France and LG Energy Solution of South Korea had expressed interest in battery manufacturing at the Nissan plants, Reuters reported[2]. The report also noted that battery production would be directed at Seat, which plans to have electric vehicles on the road by 2025.

As for the infrastructure to support these EVs, Seat and Iberdrola inked a deal in July 2020 to develop an EV charging network and “integrate Iberdrola’s infrastructure into the navigators of electric vehicles,” according to a press release[3].

The utility is due to install 150,000 electric chargers across Spain over the next five years to help support the launch of eight pure-electric car models from Volkswagen Group companies in the coming 18 months, the release states.

Iberdrola’s role is still to be clarified

It remains unclear what role Iberdrola will have in the battery manufacturing partnership, however. The utility declined to provide further details beyond what had been published by the government, and Seat did not respond to a request for information from GTM.

Elsewhere, a lack of specifics around the government’s plans implies that Spain’s electric vehicle strategy is still very much work in progress. A spokesperson from the Ministry of Industry, Trade and Tourism said by email that “there are still no details [about] the project.”

Nevertheless, Iberdrola’s interest in the project is intriguing because there are few other examples of utilities being directly involved in battery manufacturing.

James Frith, head of energy storage at analyst firm BloombergNEF, said via email: “Clearly, for a utility, EVs are good because they will be using electrons rather than oil to refuel.”

Spain has lagged behind European peers such as France and Germany in terms of battery manufacturing plans but could take the lead in the market thanks to the presence of lithium deposits on the border with Portugal.

Last month, a Spanish startup called Phi4Tech announced plans to build a lithium-ion battery factory in Badajoz, Extremadura in southwest Spain. The batteries would be made with materials supplied by Lithium Iberia, which has a mining operation in nearby Cañaveral, Cáceres.

Another mining firm, Infinity Lithium, is also looking to exploit the resource but is facing local community opposition, according to reports[4].

Energy Transformed Podcast: Can batteries take charge of the grid?

Potash mine to build wind, solar and battery micro-grid for most of its power needs