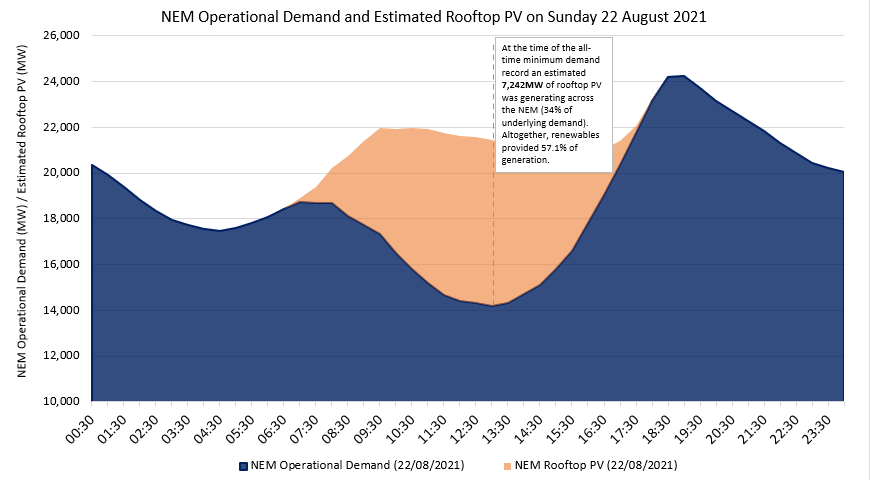 For the first time in the history of our national energy market, solar generated more electricity than coal, providing 41.4% of the national market on Sunday, while coal accounted for 41.2%.

For a few shining minutes on Sunday, renewable energy took a bigger slice of the National Electricity Market than Australia’s bedrock, coal. Together, solar, wind and hydro made up 57% of the national electricity generation. Coal, on the other hand, plunged to just 41.2%, or 9315 MW. It was the first time solar power has outstripped electricity generated from coal in the market’s two decade history.

As WattClarity’s Paul McArdle noted, the milestone came just a week after the National Electricity Market set a new record for minimum Operational Demand[2], hitting 15,061 MW on Sunday August 15, only to have that record broken on Sunday August 22, when demand dipped to just 14,193 MW.

The momentous shift drove electricity prices into the negative for most of Sunday afternoon, leading clean energy advisor Simon Holmes à Court to note renewable energy could have made up an even higher portion of the energy mix had wind producers not opted to self-curtail to avoid the price hit.

“There was a significant amount of curtailment,” Holmes à Court told The Guardian[5]. “What it shows is that there’s already more renewables that could have gone into the grid if the coal plants were more flexible and transmission was upgraded.”

Unsurprisingly, prices are negative across the board pic.twitter.com/QQAcDURTRQ[6]

Still a ways off

Despite the happy trajectory of renewables[8], Australia is still a long way way from reaching a truly green grid. On Monday, the Clean Energy Investor Group, which represents 18 major institutional investors including billionaire Andrew Forrest’s Squadron Energy, called on the federal government to commit to a Step Change Scenario[9] to avoid catastrophic climate change.

The Investor Group has taken particular issue with reforms recently presented to parliament by the Energy Security Board (ESB), which include a proposal to pay ageing coal and gas power plants to maintain their “capacity” to generate electricity if required. Critics say the move amounts to a governmental ‘coal-keeper’ package which will hinder the country’s clean energy transition.

Australia’s federal government has been the subject of increasing international scrutiny for its refusal to commit to net zero by 2050, a target most now see as falling far short of what’s needed[10].

How Australia could save almost $7 billion on its energy transition