How Australia could save almost $7 billion on its energy transition

No, not just any of the five ISP scenarios — a panoply of possibility that the market has been trying to reckon with since the ISP began in 2018 — but the Step Change Scenario of the current 2020 ISP iteration, which the CEIG says aligns most closely with international commitments to limit global warming to under 2 degrees Celsius.

“Investors are deploying funds into markets where they see an alignment with those broader global goals, and shifting away from markets that aren’t aligned because they are considered too risky,” Simon Corbell, CEO and Chair of the CEIG told pv magazine Australia.

The overarching risk he adds is that while capital gravitates toward the certainty of countries with clear policies toward net zero, “Australia is not seeing enough committed projects moving forward; although there will continue to be investment in Australia’s renewable projects, it will be slower, and more expensive than it should be”.

Investors, says Corbell, “want to highlight to decision makers that there is a significant cost premium on Australian projects in the market at the moment — it’s between 100 and 200 basis points above other OECD markets”.

The CEIG commissioned Rennie Partners to assess the risks and define the principles that could guide Australian governments to meet their net-zero commitments, attracting the necessary capital at the lowest cost.

The group identified $70 billion worth of commitment required by the end of the 2030s. “We could reduce that by $7 billion if we had a cheaper cost of equity, and we’re only going to get that if we have a more investor-friendly approach to market design,” says Corbell.

Adopting the ISP’s Step Change Scenario — which is characterised by accelerated global ambitions to limit atmospheric warming, consumer-led change with a focus on energy efficiency assisted by technology, switching to clean fuels in transportation, private vehicles and domestic cooking and heating, and growth in carbon sequestration, particularly in the land-use sector — is the easy part.

One would assume that recent revisions of regulations by entities such as the Energy Security Board and the Australian Energy Market Commission have constantly been striving to create an environment conducive to expansion of and investment in clean energy generation.

But reforms recently presented to parliament by the Energy Security Board include a proposal to pay ageing coal and gas power plants to maintain their “capacity” to generate electricity if required.

The Institute for Energy Economics and Financial Analysis (IEEFA) in a joint report prepared with Green Energy Markets and released on Friday, found that reliability of the electricity system “is not at threat by the level of likely coal power plant exits over the next ten years,” said Johanna Bowyer, the report co-author and IEEFA electricity analyst.

In fact, yesterday, Sunday 22 August, saw solar take over from coal for the first time, as the majority generator of electricity across the entire NEM, delivering 57% per cent of demand just after noon.

Nonetheless, Australia’s Federal Energy Minister, Angus Taylor, is backing the plan for an unnecessary $2.9 to $6.9 billion in payments to keep the fossil-fuel plants alive.

On behalf of renewable energy investors, Corbell describes the proposal as “unhelpful and unnecessary” saying it further clouds the investment environment. 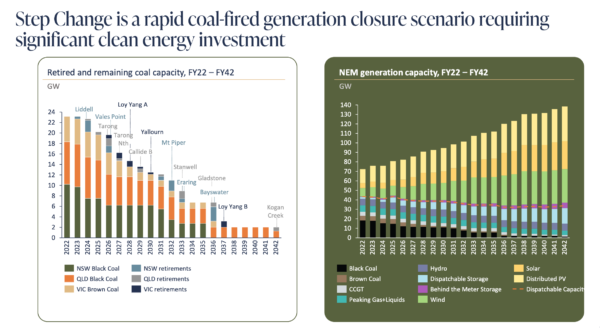 The risks to investors are myriad

“The key issue for investors,” he explains, “is being able to predict with a reasonable level of certainty their revenues over the life of a project. At the moment that’s very difficult to do and some of the proposals we’ve seen from the ESB further complicate that picture.”

Constantly changing marginal loss factors are deemed by the Rennie Partners’ analysis as one of the greatest risks for investors in renewable projects; their volatility makes it virtually impossible to calculate returns on investment. And the introduction of local marginal pricing of energy generation, that reflects energy losses in transmission, and congestion at different points in the grid is also too complicated a methodology to give investors confidence.

Which raises the spectre of connection difficulties in the NEM, which are likely to be alleviated under the planning of REZs, but are expected to remain a challenge in the broader NEM.

The assertion is supported by last week’s PwC analysis, which found that the time taken for projects to achieve connection in the NEM has increased from the shortest recorded average period of 1.4 years in 2018, to 2.3 years in 2020.

AEMO’s launch of a new online simulator on Friday, to assist developers with modelling their grid connections, and thereby speed the process, is promising. Some 97 GW of large-scale generation projects — 33 GW of which are solar farms — are currently in the application pipeline, and may live to demonstrate the time-to-connection improvement.

So while electricity-market reforms are underway, only some are helpful from an investor perspective, and the Federal Government remains unwilling to commit to overall unifying policies.

Corbell says the Australian states and territories hold the key to coordinated NEM control: “The states have taken strong leadership in the development of the future NEM,” in terms of proactively setting up REZ development and transmission augmentation frameworks, but there is still what Corbell describes as “a degree of inertia in terms of whole-of-NEM governance”.

The CEIG proposes an antidote that could but need not include the Federal Government, in the form of a new intergovernmental agreement between the states, “with clear goals based on the ISP Step Change scenario for development of the NEM”, says Corbell

These goals and the other four Clean Energy Investor Principles could set the framework for action that would “direct market bodies to implement the necessary rule changes to achieve a decarbonised NEM by the end of 2040” — at an almost $7 billion reduction in cost to taxpayers. That’s some incentive.

What Emerging Climate Tech Sectors Are Ready for Growth?

How to protect rooftop PV systems from fire risk