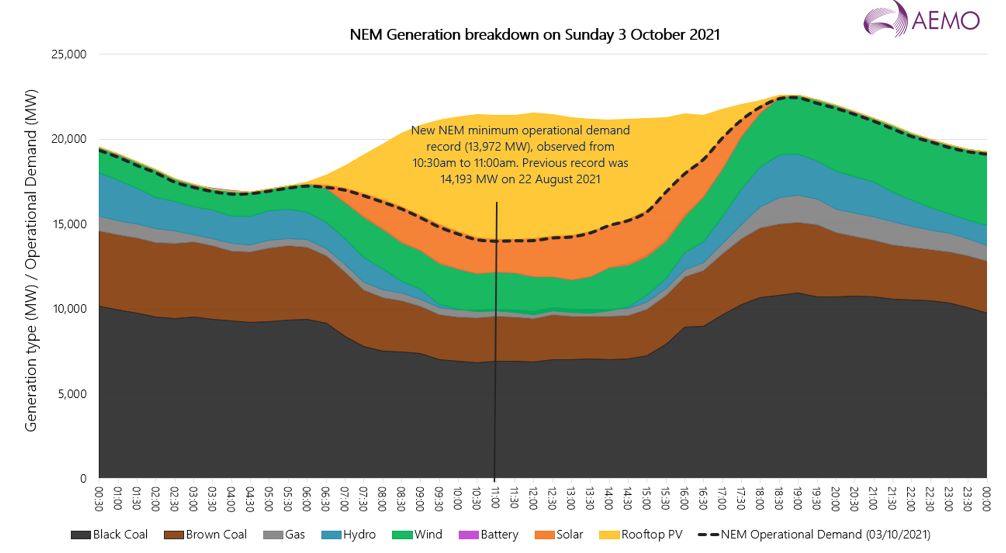 On Sunday, Australia set a new record for minimum operational demand, with the national grid dipping below 14 GW. Renewables met 55% of that, while rooftop solar accounted for 34%.

In case you were in need of a little mid-week pick me up, on the weekend Australian solar set two new records, with South Australian solar generating more electricity than the entire state needed, while the very next day rooftop solar plunged the national electricity market (NEM) to a new operational demand low, breaking the record it set just six weeks prior.

This new minimum operational demand meant there was little need for our coal generators to dispatch their energy on Sunday, further diminishing their profitability and sounding the death kneel.

The Australian Energy Market Operator (AEMO) announced the news in a tweet, saying “the NEM broke through the 14,000 MW minimum operational demand level for the first time since Tasmania joined in 2006, setting a new record of 13,972 MW on Sunday, 221 MW below the August 2021 record.”

The August record it refers to happened on the 22th, also a Sunday, in which solar generated more electricity than coal for the first time in the history of our national energy market, providing 41.4% of demand. [4]

This Sunday solar accounted for a little less at 34%, with the total renewable share at 55%.

But Saturday wasn’t going to let Sunday steal all the weekend’s glory, with South Australia setting its own record. Shortly after 11am, solar reached 106.1% of the state’s electricity demand, with the excess exported to Victoria.

Bluescope says climate action is ‘not optional’, while…