On Monday, May 31, the long-planned $2 billion Project EnergyConnect, which will link South Australia (SA), Victoria (VIC) and New South Wales (NSW) with much overdue capacity for the transmission of renewable energy, was given the green light for construction. [1]

Project EnergyConnect is great news for the continuation of world-leading renewable energy integration in SA, an integration which the Institute for Energy Economics and Financial Analysis (IEEFA) sees as a blueprint for energy planners around the world in the transition to renewable energies.

In a new report titled “A Grid Dominated by Wind and Solar Is Possible – South Australia: A Window Into the Future”, IEEFA sets out seven vital lessons the world can learn from SA after the state’s large and small scale variable renewable energy generation grew from 0% to 60% in 14 years. Even more remarkable considering the Labor government elected in 2002 set a 2020 target of 26% renewables. [2]

40% of homes in South Australia have rooftop solar, meeting 13% of SA’s grid demand in 2020. In the same year, 4% came from utility-scale solar, and 42% came from wind, with the remainder coming from gas generators. 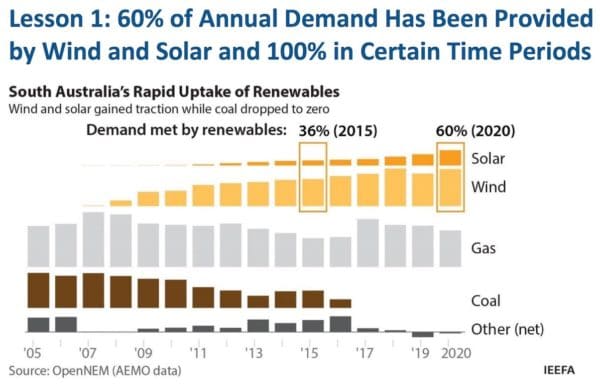 One of the report’s co-authors, DER specialist Gabrielle Kuiper, said SA has “shown that 100% solar generation is possible during the daytime to meet users’ energy demands.” In particular, the report states, SA “shows that the historical concept of a ‘coal baseload’ is not necessary for a reliable electricity system.”

And not only is coal not necessary, but it’s no longer cheap either. From 2017 to 2021, IEEFA reports that SA’s increasing proportion of low-cost renewables has seen wholesale electricity prices drop 65%.

The report’s author, Johanna Bowyer, said “Coal was phased out in 2016. Today the grid is dominated by wind and solar backed up by battery storage and interstate grid connectivity, with peaking gas being used as a temporary generation technology until South Australia moves to net 100% renewables.”

The second lesson the world can take from SA, according to IEEFA, is that SA’s rapid transition was driven by “supportive government policy and particular features of the regional market”.

Policies like the national Renewable Energy Target, the South Australian rooftop solar feed-in tariff, and the Home Battery Scheme, have pushed SA onto a path where it is expected to reach net 100% renewables by 2025, five years ahead of its 2030 target. [3]

Throw in Project EnergyConnect, referred to at the top of this article, which is expected to unlock 1.8 GW of renewable energy along its path and save SA households another $100 on their annual energy bill and $60 for NSW households.

Not only is SA on target to meet its 2030 renewable energy target by 2025, but the state has also set a target of 500% renewables by 2050, with the aim of becoming a renewable energy export superpower. This is to say, exporting excess renewable energy to neighbouring states via Project EnergyConnect exporting green hydrogen, green steel, and other low emissions productions internationally.

Moreover, IEEFA points to SA’s ambition, for instance in the Home Battery Scheme, as the reason why it has attracted companies like Sonnen and Alpha-ESS to build manufacturing and assembly facilities in SA.

IEEFA also points to SA as an example of a jurisdiction with high renewable energy penetration which has been reliable and secure.

Part of this success can be put down to the Hornsdale Big Battery which has been able to respond rapidly to fluctuations, proving an enormous success for SA and an equally enormous financial success for Tesla and Neoen. [4][5]

SA now has four grid-scale batteries in operation with two more on the way, and the SA energy minister Dan Van Holst Pellekaan is not yet satisfied, telling ABC Four Corners Fired Up, “we’ll get more and more of those.”

Indeed, the only year in the last 15 in which SA didn’t meet its reliability standard was 2008-2009 when extreme temperatures brought several states’ infrastructure to its knees. “This shows reliability can be maintained in a 60% variable renewable energy grid” the report concludes.

However, the report was not lax on the innovations, investment and regulatory adjustment that is still necessary. Although, one of the regulations IEEFA took truck with in particular was the 2020 regulation which required rooftop solar inverters to be capable of remote disconnection by the market operator. “IEEFA has raised concerns regarding the technical need, economic efficiency and lack of social licence for this regulation,” the report says.

“Long term planning for a digitalised, zero-inertia, zero-emissions system needs to start now in order to avoid unnecessary regulations or investment in technology that may become obsolete,” the report continued.

The transition to a zero-emissions and zero-inertia grid with ready demand response and “optimisation of both large scale and distributed energy resources has yet to be achieved anywhere in the world,” Bowyer noted. “South Australia has the potential to achieve this outcome within a decade with thoughtful planning and policy.” 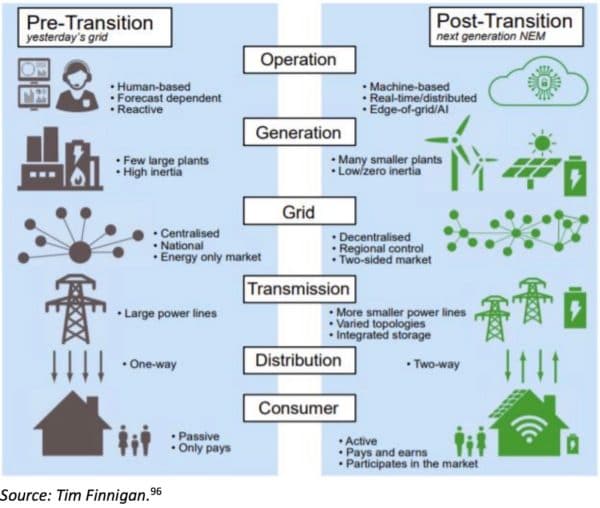 So, to reiterate, IEEFA’s seven vital lessons were:

Hybrid operational strategy to use lithium-ion storage in…