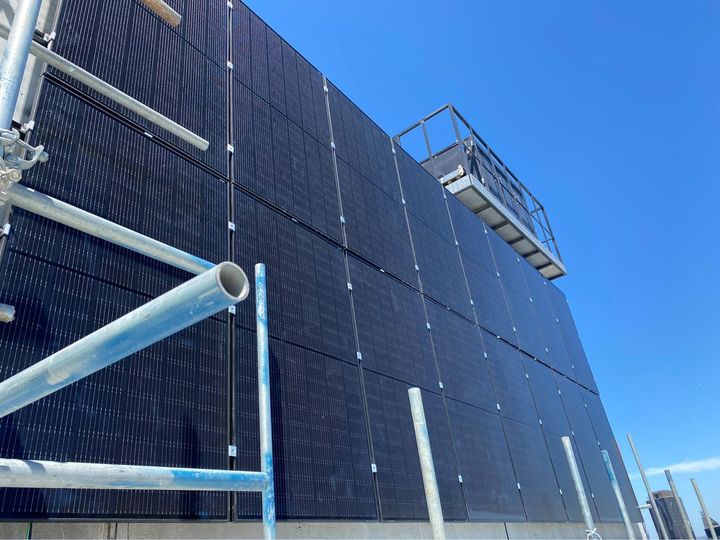 Victorian-based property developer Beulah has announced its soon-to-be-completed Paragon tower in the heart of Melbourne will be home to the nation’s largest and most efficient vertical solar PV system.

The $200 million 48-storey mixed-use building in Melbourne’s CBD is due to be completed later this month but already Beulah is claiming the 42 kW solar PV system installed on the tower’s core walls is the largest and most efficient vertical solar facility in Australia, declaring it will outperform buildings with similar vertical solar power plants.

The installation comprises 128 Trina Solar HoneyBlack DD06M.05(II) 325 W modules which are expected to generate 30 MWh of electricity. The modules have been installed on the core walls of the tower and cover 158m².

Melbourne-based essential services provider b.energy was responsible for the design and construction, and operations and maintenance of the system and opted for is labelled a ‘verticality renewables strategy’ as a way to overcome limited space on the roof of the tower

“The combination of a painted lift core and stylish HoneyBlack modules has not only markedly complemented the building design aesthetics, but will assist in reducing common property electricity costs,” he said.

“Whilst electricity production would generally be closer to c56 MWh for flat or degree mounted systems, generating c30 MWh far exceeds the renewables that could otherwise be achieved on the constrained rooftop.”

While b.energy has used traditional modules for the Paragon install, the project adds weight to a report released by the Australian PV Institute[2] (APVI) which declared the business case for building-integrated PV (BIPV) is stronger than ever, identifying it as one of five key avenues for increased market penetration of PV.

BIPV is yet to enjoy the same widespread deployment as roof-mounted solar modules that adorn more than 2.56 million homes across Australia, but the APVI believes the versatility of BIPV[3] means it has enormous potential for growth.

The business case recommendations are detailed in the International Energy Agency (IEA) report[4] on BIPV which was released late last year and highlights that “building-integrated PV offers huge potential to exploit roofs and facades as a local energy source”.

Beulah executive director Adelene Teh said the inclusion of the solar PV power plant as part of the Paragaon project was important in ensuring the company continues its journey towards sustainable developments with reduced carbon footprints.

The company said the utilisation of the tower’s vacant space is not only innovative but is also an attractive value-add that differentiates the tower’s embedded renewables offering which, in turn, is an enticing cost-saving to prospective residents and the developer.

Solar panels installed across 59 bus and train stations in Perth

Solar panels installed across 59 bus and train stations in…