By solarinsider On Jul 25, 2022
Scientists in Europe say they have developed a working model of a solar-powered tower that can turn water and carbon dioxide into jet fuel.[1]

The tower, built in Spain, uses solar radiation to power a oxidation-reduction reaction cycle which turns water and carbon dioxide into a synthetic gas.

The gas is then converted into liquid hydrocarbon fuels like kerosene and diesel.

The findings were published today in the journal Joule.

The scientists say the solar-made kerosene is fully compatible with existing aviation infrastructure, meaning it can be used in current jet engines.

It can also be blended with conventional jet fuel.

The tower is the first time the solar-to-jet fuel process has been done outside a laboratory.

“The amount of CO2 emitted during kerosene combustion in a jet engine equals that consumed during its production in the solar plan,” Swiss professor Aldo Steinfeld said.

“That makes the fuel carbon neutral, especially if we use CO2 captured directly from the air as an ingredient, hopefully in the not-too-distant future.”

Planes account for about five per cent of human-caused greenhouse gas emissions.

There is currently no clean alternative to jet fuel.

The tower is surrounded by solar panels, which are pointed at the reactor where the water and carbon dioxide are stored.

The sun’s radiation is reflected from the panels onto the reactor, which powers the conversion process.

In its nine-day operation run, the solar energy input efficiency was four per cent, but Steinfeld said he hopes to dramatically improve that efficiency. 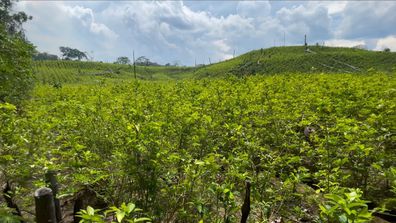 Fierce conflict is being waged over these plants