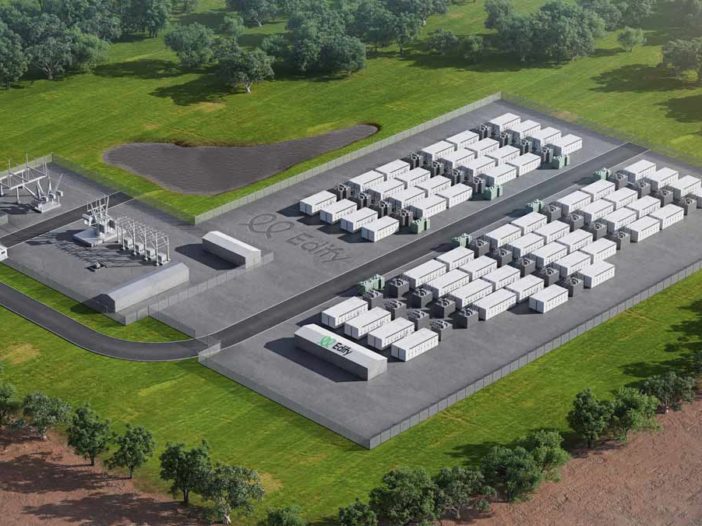 Edify Energy has landed a $6.6 million grant from the Australian Renewable Energy Agency to help fund the installation of advanced inverter technology at a big battery next to its Darlington Point solar farm in south west NSW.

The ARENA funding is targeted at a 25MW/50MWh component of the previously announced – and financed [1]– three-part project that totals 150MW of capacity and 300MWh of storage at the Darlington Point substation, near the 275MW solar farm of the same name.

Edify has contracted one part of the Darlington battery complex with Shell Energy[2], as part of a deal to sell electricity to the NSW government, and has contracted a second 60MW/120MWh component to EnergyAustralia.

All three components will feature Tesla Megapack technology, and advanced grid investors, which will provide ‘grid forming’ and system support services to the broader grid by mimicking the synchronous nature of traditional turbine-driven generators, like those of coal, gas and hydroelectric power stations.

“The battery could help improve system strength in a weak part of the grid, unlocking opportunities to support more renewable energy generation,” ARENA said in a statement.

ARENA said, however, that the grant was not part of the $100 million funding round[3] for advanced inverter technologies that attracted more than 50 applicants, and has been narrowed down to a short list of 12 projects representing more than 3000MW and 7000MWh of battery capacity.


Another recently announced project, the 50MW/50MWh Broken Hill battery proposed by AGL[4] has also landed ARENA funding for advanced inverter technologies outside of the $100 million funding round.

Edify’s Darlington Point project has also secured $6.5 million in funding from the NSW government, under the Emerging Energy Program, and is being constructed in the South-west region of the state that has been earmarked for a Renewable Energy Zone.

The timing of the announcements of the ARENA and NSW funding is curious given that Edify announced last month that it had reached financial close on the project[5], saying it would become Australia’s largest battery with grid forming capabilities.

“We have long been believers of harnessing the full capability of power electronics and preparing for a 100 per cent renewables-based grid.  It is exciting for Edify to be delivering another ‘first in market’ facility,” Edify Chief executive, John Cole said at the time.

“In this instance, we’re using the combination of the dispatchable properties of batteries with a new vintage of grid forming inverter control systems to create a generator that can provide power system support services, which have traditionally been provided by thermal synchronous generators.”

Acting ARENA CEO Chris Faris said in today’s statement that batteries were emerging as a key part of the future grid, with the ability to help strengthen grid stability in addition to providing energy storage services.

“To support the rapid transformation of our electricity system, large scale batteries will need to evolve to do more than just store energy,” Faris said.

“They need to be equipped with advanced inverters that can provide critical grid stability services to keep the system safe and secure, especially as synchronous generators retire and renewables provide a higher share of supply.

“That’s why it’s important to support and demonstrate projects like this, where batteries with advanced inverters can help supply critical stability services to the grid.

“Large scale batteries like Edify’s Darlington Point battery are not only firming our renewable energy but also strengthening the grid particularly in regional areas, where they will help to unlock more renewable uptake,” Faris added.

Edify previously received ARENA support for the construction of the 25MW/50MWh Gannawarra big battery[6], which is co-located at a 50MW solar farm in north western Victoria.

Michael Mazengarb is a Sydney-based reporter with RenewEconomy, writing on climate change, clean energy, electric vehicles and politics. Before joining RenewEconomy, Michael worked in climate and energy policy for more than a decade.