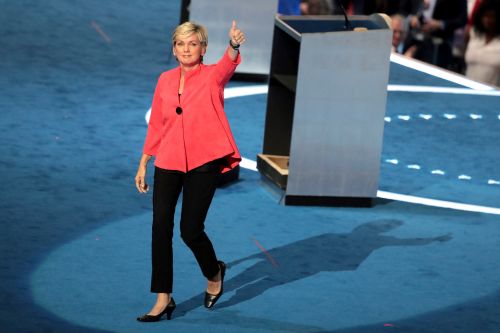 The U.S. Senate voted on Thursday to confirm former Michigan Governor Jennifer Granholm as Secretary of the Department of Energy, kicking off the administration’s grand plans to shift the country towards decarbonization while boosting the economy.

After the vote, Granholm tweeted what has become a common refrain for her nomination: “I’m obsessed with creating good-paying clean energy jobs in all corners of America in service of addressing our climate crisis.”

Senators confirmed Granholm with a 64-35 vote. Former Energy Secretary Rick Perry, who led the department during the majority of the Trump administration, was confirmed 62-37. Republicans who did not support Granholm’s confirmation have spoken against the administration’s plans to transition to clean energy. Sen. John Barrasso of fossil fuel-producing Wyoming — who voted against Granholm’s confirmation — argued ahead of the vote that “workers livelihoods are being sacrificed in the name of the Biden agenda.”

Jobs have been the central theme of Granholm’s nomination. The new Secretary’s January confirmation hearing[1] largely revolved around DOE’s focus on creating jobs as it works to push forward the administration’s climate and clean energy plans.

“The president’s plan of building back better…would create more jobs in clean energy than the jobs that might be sacrificed. But I will say this: We don’t want to see any jobs sacrificed,” Granholm said at her confirmation hearing. “This is something we’re going to have to work on together to make sure that people remain employed.”

It’s unclear how many jobs will result from the policies the Biden administration can implement. Pre-pandemic statistics from the Bureau of Labor Statistics show wind turbine technicians and PV installers ranking among the fastest growing professions through 2029. That growth represents about 10,400 new jobs, far shy of the millions Biden has promised. But those additions also do not take into account the potential of new policies the administration may enact.

In January, Biden signed an executive order[2] kickstarting the creation of a Civilian Climate Corps. A national clean energy standard would also require significant buildout of wind and solar, compelling those industries to add new positions to keep up with demand. A newly released analysis from Energy Innovation suggests such a standard[3] would create 3.1 million job-years by 2030 and 5.5 million job-years by mid-century (a job year counts as one job for one year).

Granholm led Michigan during the economic crisis of 2008 and 2009, a background both she and supporters have framed as important experience to help the U.S. navigate through current upheaval.

“There is no question she is uniquely qualified to serve as Secretary of Energy. As the governor of Michigan she led our state through an economic crisis,” said Sen. Gary Peters, a Michigan Democrat, before the vote. “She knows how to deal with multi-faceted challenges and has a documented record of strong leadership.”

In addition to creating jobs in the U.S., Granholm has outlined two main goals for her tenure at DOE: supporting research and development and focusing on national security. Nuclear responsibilities, such as non-proliferation and cleanup, account for the majority of the department’s budget.