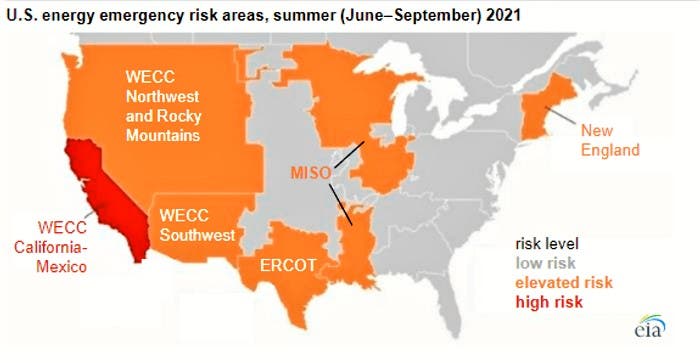 Parts of the United States are at elevated or high risk for potential electricity emergencies this summer, according to the North American Electric Reliability Corporation’s (NERC) 2021 Summer Reliability Assessment[2]. Summer peak electricity demand in the United States is strongly influenced by temperature. NERC’s report notes that above-normal temperatures are expected for much of North America this summer and several regions are at risk of electricity shortfalls during above-normal peak temperatures.

NERC[3] is a nonprofit international regulatory organization that oversees regional electric reliability entities in the Lower 48 states, Canada, and parts of Mexico. At the beginning of each summer, NERC publishes a reliability assessment that tabulates anticipated electricity demand and supply changes and highlights any regional challenges or expected conditions that may affect the bulk power system.

According to NERC’s assessment, electric supply shortages may occur in the western United States, Texas, New England, and parts of the Midwest.

In the Western Electricity Coordinating Council (WECC), which includes the western half of the United States, resource and energy adequacy is a significant concern this summer. Generating capacity and projected electricity demand are at similar levels as they were in 2020, when an August wide-area heat wave caused rolling blackouts. NERC found that WECC subregions in the Southwest and Northwest have enough resources to meet electricity demand under normal peak summer demand conditions, but they are at elevated risk of electricity shortfalls if demand is higher.

The highest risk of electricity emergency is in California, a WECC subregion, which relies heavily on energy imports during normal peak summer demand and when solar generation declines in the late afternoon. Although California has gained new flexible resources to help meet demand when solar energy is unavailable, it is at high risk of an electricity emergency when above-normal demand is widespread in the west because the amount of resources available for electricity transfer to California may be limited.

The Midcontinent Independent System Operator (MISO) and ISO-New England have sufficient resources to meet projected peak demand. However, if above-normal levels of electricity demand (which NERC calculates based on historical demand) occur in these regions, demand is likely to exceed capacity resources. In that case, additional transfers of electricity from surrounding areas will be needed to meet demand.

You can find additional information on these regional challenges and other expected conditions that may affect the bulk power system this summer in NERC’s 2021 Summer Reliability Assessment[4].

Have a tip for CleanTechnica, want to advertise, or want to suggest a guest for our CleanTech Talk podcast? Contact us here[8].

New UCS Research: Utilities’ Uneconomic Coal Use Is Being…

Redflow in “strong” position for US push, despite falling…