Debt financing services from Bank of China, Commonwealth Bank of Australia, and Westpac, have brought the first 400 MW stage of the New England Solar Farm to financial close, a massive milestone for massive hybrid project.

The first 400 MW stage of the New England Solar Farm near Uralla in New South Wales (NSW) has reached financial close thanks to debt financing from Bank of China, Commonwealth Bank of Australia, and Westpac. [2]

Joint venture UPC/AC Renewables Australia (UPC Renewables and AC Energy) said in a statement that construction on the first stage of the project got underway at the end of 2020, with lead contractor, Spanish infrastructure development group Elecnor, having already commenced early works through its subsidiary Green Light Contractors, including substation and road design. [3]

The New England Solar Farm will eventually become a 720 MW Solar installation combined with a 400 MWhr battery energy storage system on site. It is hoped this first stage of the enormous project will be connected to the National Energy Market (NEM) and producing clean solar energy by July 2022, with a tentative date near the end of 2023 for the entire project to be operational.

Of the 400 MWh lithium-ion battery storage facility planned for the site, UPC/AC Renewables plans for the first 50 MWh, which is supported by the NSW Government’s $75 million Emerging Energy Program, to be operational by mid-2022 along with the first stage of solar installation. [4]

The largest hybrid solar and battery project in Australia, the New England Solar Farm’s two solar fields sit within the area of the recently announced New England Renewable Energy Zone (REZ), but the project was planned and had connection to transmission approved by TransGrid before the 8 GW REZ (the second to be set on a path to development by the NSW Government) was announced in July 2020. [5] 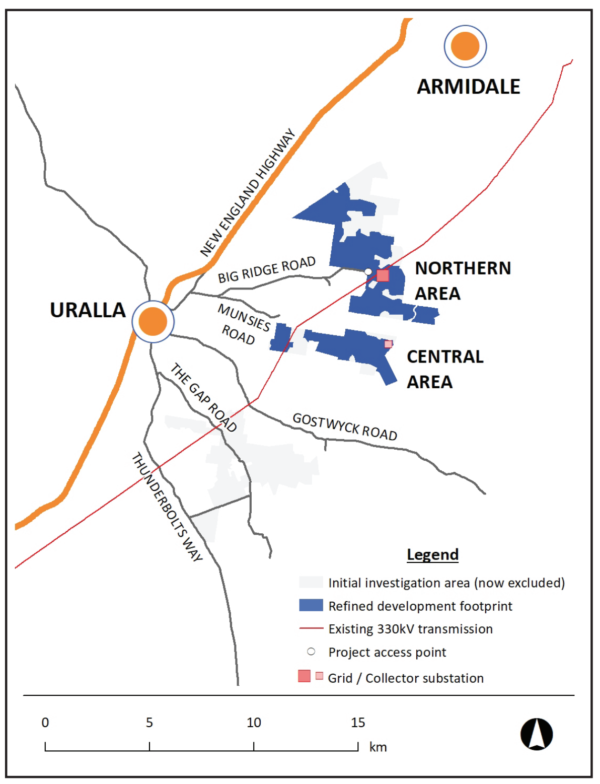 “It’s exciting to achieve financial close on a merchant basis for such a large project, which is the first of many such projects we have in Australia,” said UPC/AC Renewables Australia CEO Anton Rohner. “UPC/AC Renewables Australia views this project fitting into the NSW Government RoadMap and look forward to being engaged in this process to help lower electricity prices in NSW.”

UPC Renewables Executive Chairman Brian Caffyn added that this is “a very large energy project even for Australia and we are proud to be associated with the New England Solar Farm and the local community and helping to transition NSW towards a clean, lower cost energy future.”

In the not too distant future the New England Solar Farm expects to participate in the bidding process of the NSW Electricity Infrastructure RoadMap to secure a long-term energy services agreement.

Once completed, the New England Solar Farm will be capable of producing enough energy to power around 250,000 homes annually, a substantial supply of energy to the market and helping to fill the gap left by the imminent closure of the Liddell Power Station.