Non-stop PV manufacturing capacity expansion has been a near-constant feature of the solar landscape over the past decade. Back to 2008 or even 2014, when market demand was trigged by early subsidy programs and an increasing awareness of the threat of global warming, capacity expansion was the first choice for many PV manufacturers – especially those from China. Scale was seen by such manufacturers as a way to produce higher-quality solar modules and as a way to achieve competitiveness.

However, there were significant risks in the push to scale. Tightened lines of capital were often stretched to breaking point when the planned ROI of new factories failed to materialise due to serious manufacturing overcapacity and the resulting price collapses. Many, if not all PV manufacturers had to rein in their ambitions, shrink in size, restructure their businesses, or even file for bankruptcy. Many famous brands rose fast, only to fall.

In 2020, despite the impact of Covid-19 on both China and the global economy, an unprecedented wave of PV production capacity expansions consumed China’s PV industry. It seems that history is repeating itself, with the addition of a new cast of characters.

This time around, production capacity expansion is at a much larger scale and wider scope than ever before. According to one statistical analysis, based on official announcements by Chinese PV companies in 2020, the total invested capital in PV manufacturing exceeded CNY 300 billion ($47 billion).

Notable among the production capacity expansion activity was the huge ramp-up of three building blocks of the PV industry: wafers, cells and PV modules – data for which is provided in the charts.

Longi retained the title of king of solar wafers in 2020, having first secured the throne back in 2016. With more than 35 GW of new investment directed toward wafer capacity, Longi ended 2020 with the total capacity to produce 75 GW, set to expand to over 100 GW by the end of 2021. 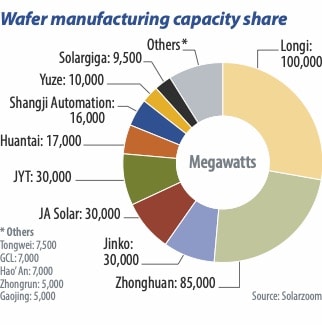 Perhaps the biggest surprise in the wafer production segment in 2020 belonged to several new entrants. Wuxi Shangji Automation is targeting investments to achieve 16 GW of wafer capacity by the end of 2021. Beijing Jingyunting Technology (JYT) also plans three big investments and is targeting 30 GW of wafer capacity by the end of 2021. Both Shangji and JYT previously were equipment suppliers, but decided to move down the supply chain to manufacture wafers themselves. And in December, a new pure-play wafer maker, Gaojing Solar Energy, entered the market with a CNY 17 billion investment plan for 50 GW of wafer capacity.

Given this massive wave of wafer capacity investment, and according to China market research institute Solarzoom, the total wafer capacity in China will reach almost 375 GW by the end of 2021.

But the bigger expansion plans come from the vertically integrated PV module makers, which pursue a secure supply of cells. Longi, formerly the largest customer of Tongwei, decided to invest and obtain 23 GW more cell capacity in 2020 and at least another 3 GW in 2021 to reach total cell capacity of 38 GW. JA Solar, Trina Solar, and Jinko all planned for around 20 GW of new capacity in 2020 and will reach a total of 30 GW, 27 GW and 31 GW, respectively, by the end of 2021. With regard to next-generation solar cell technologies – primarily a two horse race between heterojunction (HJT) and TOPCon – the pure-play cell makers like Tong

wei and Aiko Solar appear to be cautious as to signalling which one they will pick. This is also true of the vertically integrated cell and module makers.

Many manufacturers indicate that p-type PERC technology will continue to satisfy the market for at least two more years and that, as such, now is not the time to lock in decisions. However, some smaller isolated cell makers have placed their bets on the future. GS-Solar, Shanxi Coal International Energy Group (SCIEG), and JP-Solar have planned a combined 30 GW of HJT lines – building that capacity in a stepwise fashion. In terms of TOPCon, Jolywood is leading the field, having commenced the installation of 2 GW of TOPCon capacity in February 2020. It is planned to be operational before the end of this year. 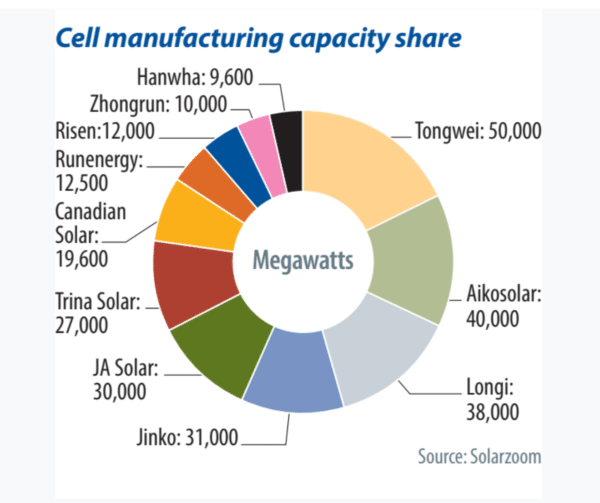 As the link between manufacturing and the end customer, it is likely there will be fierce marketing and sales competition among major PV module makers throughout 2021. The combined announced sales targets of only the six leading companies, Longi, Jinko, JA, Trina, Canadian Solar and Risen, reaches over 170 GW for 2021. This is close to or even exceeds some of the most optimistic estimates of the total global PV market demand for this year. 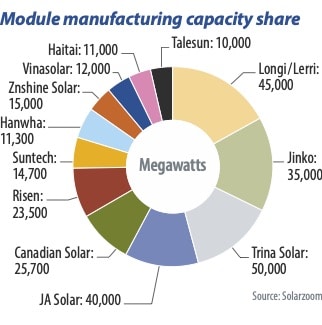 While the manufacturing capacity expansions indicate raised expectations, PV module manufacturer profits suffered greatly in 2020, due to supply chain turbulence over the course of the year, firstly from Covid-19 and then as a result of supply chain bottlenecks. Glass shortages, in particular, pushed costs significantly higher. As a result, some manufacturers sought to rectify the situation by entering into long-term contracts or even closer partnerships with their material vendors.

Longi signed a long-term purchasing contract with Asia Silicon for polysilicon supply and with South Glass for PV glass. In terms of sales channels, Longi was willing to sign similar offtake deals with Tongwei and Runergy for its wafers.

Tongwei signed contracts with Jinko for some of its cell production, and even established joint venture vehicles with Longi and Trina Solar to purchase wafers from the former and supply cells to the latter. Trina Solar is buying polysilicon from Tongwei and has signed contracts with Zhonghuan and Shangji Automation for wafer supply. JA Solar has signed with Xinte for polysilicon purchases and Rainbow for PV glass supplies. There were many other similar deals signed throughout the year.

Supply capacities in polysilicon appear to be the tightest. As a result, several huge orders have been signed between wafer makers and polysilicon suppliers. It has been reported that more than 90% of China’s polysilicon output is already locked in this year. Longi is understood to have turned to overseas suppliers OCI and Wacker to secure polysilicon supply.

“History,” as the famous Chinese saying goes, “does not simply repeat itself, but it always has the same rhyme.” Compared to previous expansions in solar’s early stages of development, the industry may have more confidence this time.

The reasons for the renewed confidence include the arrival of solar grid parity in many countries around the world, and importantly China since 2019. There is also intense interest in PV as an investment class coming from banks and global funds, with solar no longer viewed as a risky investment. And the embrace of renewables – underpinned by China’s pledge in September to reach carbon neutrality by 2060 and carbon peak by 2030 – cannot be ignored. Annual installations of some 70-90 GW of PV can be expected in China going forward, as the foundation of China’s transition to emissions reductions – and this vast number of PV arrays will be supplied by solar manufacturing at never-before-seen scale.

Solar tax proposal met with immediate outcry, but AEMC insists ‘doing nothing is not an option’

Space capsule with precious cargo crashes to earth in Australia