Australia might have had a surprisingly good year of home battery installations[1] in the year of the Coronavirus, but Germany smashed it out of the park, with the addition of more than 100,000 residential battery systems in 2020 taking the European country’s cumulative total to 300,000.

The impressive numbers come from the latest report[2] put together by 3 Energie Consulting for Bunderserband Energiespeicher (BVES), the Germany Energy Storage Systems Association, which puts Germany’s total capacity for home battery storage at a massive 2.3GWh at the end of the “Corona year.”

The report notes that just under 70 per cent of all new solar installations in Germany now include battery storage, which is a big number on its own, but looks huge next to the 9% of new home solar systems in Australia that included a battery in 2020.

On top of this, the average size of battery systems that households are installing is also going up, increasing from 8kWh in 2019 to 8.5kWh in 2020.

The report says the key drivers for the market’s growth have been the trends towards system integration, flexible sector coupling and electromobility, with clever charging solutions including storage and self-supply software platforms.

The threat of reaching the 52 GW solar subsidy limit – and then the elimination of this threat – was also pin-pointed as having given the German PV and home storage market additional impetus.

“An addition of more than 100,000 house storage systems in one year alone is a great result,” said Urban Windelen, the executive director of BVES.

“And at the same time a clear signal that citizens in households, trade and industry increasingly want to rely on storage technologies in order to make their energy supply safe, green and cost-efficient.

“The energy transition is missing something without energy storage. That is becoming increasingly evident. Technically, the industry can do pretty much anything. Different technologies for all sectors and all applications are finished and ready to use,” he added.

“Now the regulatory brakes must finally be released. Especially if we want to secure and support domestic technical excellence and high added value in the industry in Germany and Europe,” Windelen said.

The chart below, which was shared on LinkedIn by Patrick Gavin Matweew[3] shows the battery manufacturers currently dominating in the German market, led by Sonnen, BYD and Senec. 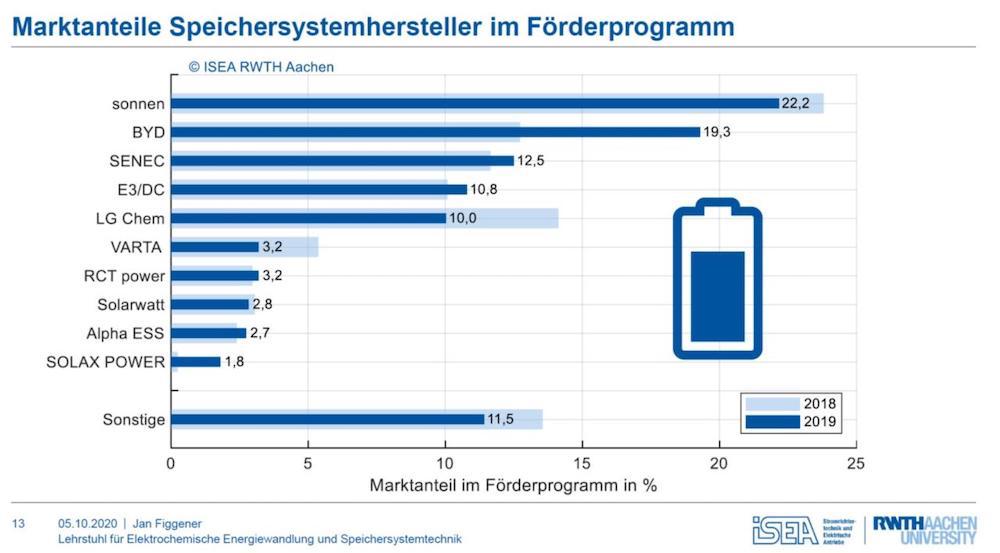 Greentech Media Chronicled Clean Energy Before It Was Cool

Solar tax proposal met with immediate outcry, but AEMC insists ‘doing nothing is not an option’